Have Insiders That Bought the Dip in March Sold Their Shares?

In early August, The Washington Service took a look at the claims being made by several outlets that insiders, who had bought into the market during its dip in March, were bailing out of their positions. At the time we found several issues with this assertion: first, that the ratio in July of companies with buying to companies with selling was not notably out of line compared with prior months when the market was climbing, and second, that insiders who had purchased in March were still within the six-month short swing window and were unable to sell shares for a profit. Now that the short swing window has elapsed, did those same insiders dump their positions?

While individual insiders may not have dumped their positions, did insiders as a whole lean towards selling in September?

On aggregate, the data shows that insiders were actually leaning more towards buying than average last month. The company ratio of buying to selling for September finished at 0.57, above the seven-year average of 0.47 (see graph below). The ratio of insiders buying to selling was similarly above average, with a ratio of 0.44 last month, compared to the 0.39 average. 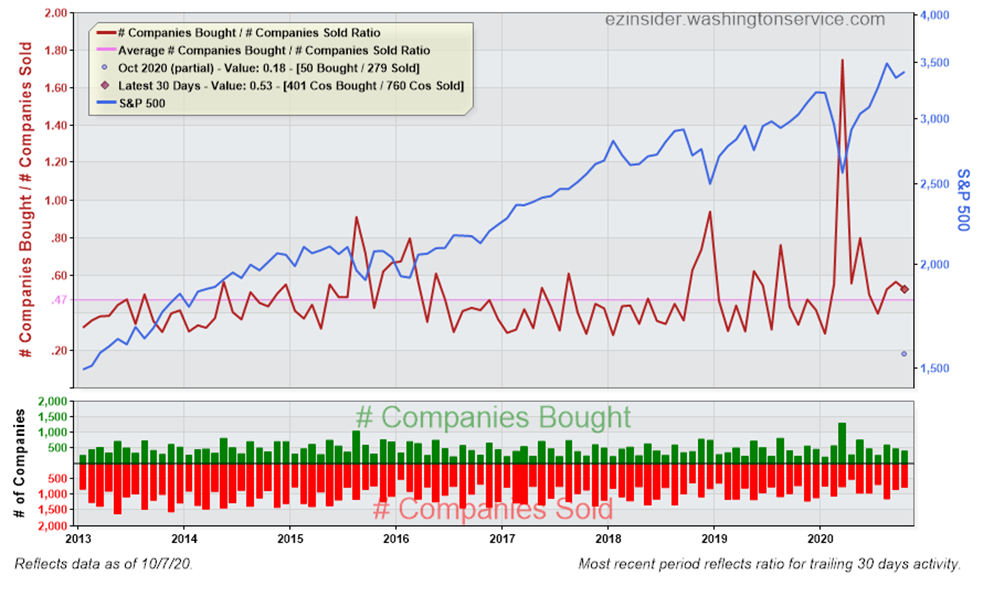 So why haven’t individual insiders been taking advantage of the market rebound?

While there were only a handful of insiders who sold positions from March, some of those who did took home a tidy profit. Installed Building Products Inc. (IBP) Director Michael H. Thomas purchased a total of 3,500 shares on March 12 and March 13 for $148K and sold 3,500 shares on Sept. 14 for $329K. Thomas pocketed a profit of $181K from the trade, for a return of 122.4%. The sale took place just one day after the insider’s six-month short-swing window ended. However, shares have risen an additional 18% since Thomas’ sale, which could highlight why insiders haven’t bailed out of their positions: in general, the market is still rising and insiders don’t have an urgency to sell in the near-term.