In July 2022, the overall value of filings rose by 57% from the prior month. That rise was largely driven by a 93% monthly increase in the value of 144s filed outside of a 10b5-1 plan, including the month’s largest filing totaling almost $8 billion.
Conversely, the value of Form 144’s filed pursuant to plans fell 20% from June, as shown on the right. The total value
brokered last month was 251% above the total value brokered in July 2021. Similarly, the total number of shares brokered
in July increased just 12% from June, but surged 422% year-over-year. The total number of filings brokered in July fell 51%
month-over-month, and also fell 14% year-over-year.

Goldman Sachs claimed the top broker title in July by brokering over 60% of the market’s reported value. Goldman’s first place finish was largely due to brokering the month’s largest filing at BABA, along with two additional filings at ZI (see graph below). UBS took second place, and brokered the month's second largest filing (also at BABA). Morgan Stanley finished in third place, and brokered the second highest number of shares and filings last month. Citigroup's fourth place was boosted by brokering the month's fifth largest trade at FISV, while Bank of America took fifth place. 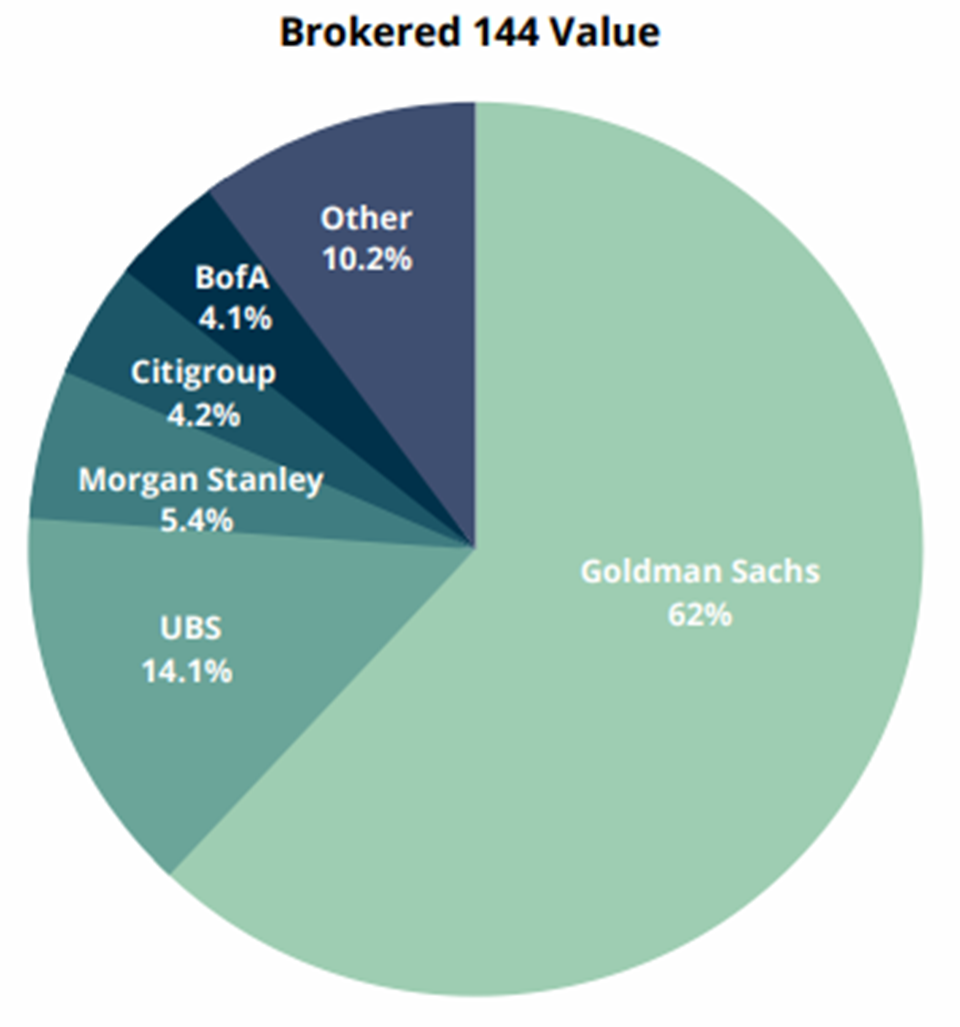 The top Form 144 filer by value in July was Valiant I & II 2002 Holdings Ltd, which filed to sell almost $8 billion of the Chinese e-commerce company, Alibaba. As disclosed on the filing, the shares registered for sale were originally acquired via private placement in 2016. That filing, and the month's second largest filing also at BABA, are a part of a potential reduction in the shares owned by Softbank Group. However, as Alibaba is a Chinese company, it is unlikely that any Form 4s will be filed to corroborate this potential sale.

NOTE TO SUBSCRIBERS:
The mid-monthly 144 Market Report is based on Form 144 filings. As noted on the report, The SEC's Public Reference Room reopened in early June and paper filings are gradually becoming available. The Washington Service is making recent filings available the same day as they are released and is currently working on integrating the older paper filings.  For more information, see our FAQ on our blog.