In April 2022, brokers filed 58% fewer Form 144s than in the prior month. That decrease in filings is reflected in the 76% slide in the month’s aggregate value, along with a 61% decline in the total number of shares brokered. When compared to April 2021, the total value this month was 66% lower than a year ago, and the total number of filings brokered fell 40% year-over-year. The total value of 144s filed pursuant to 10b5-1 plans slid 62% from March, and also dropped 66% from a year ago. As shown on the charts above, the value of 144 filings (both overall and pre-arranged) fell to its lowest point in the last six months.

Morgan Stanley retained the top broker title in April by brokering nearly 43% of the market’s reported value. They also finished first in the total number of shares brokered, and second in the number of filings in April. Their first-place finish was due in part to brokering the month’s largest trade for NWG. E*TRADE took second place by value, and brokered the highest number of filings last month. For the second month in a row, UBS finished in third place while JP Morgan Chase came in fourth. Goldman Sachs rounded out the rankings, while finishing in second in terms of the number of shares brokered in April. 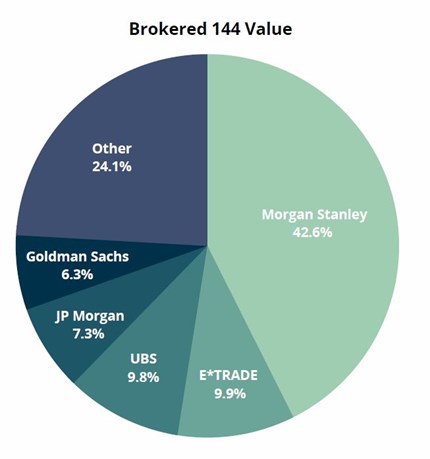 The top Form 144 filer by value in April was the British Treasury, which filed to dispose of approximately $297 million of NWG. The treasury’s stake in the bank was acquired during the height of the 2008 financial crisis in an effort to stabilize the Royal Bank of Scotland, which eventually became NatWest Group. Rapino’s filings at LYV represent the highest value brokered for an individual insider, and were filed as a part of his ongoing 10b5-1 plan to dispose of stock options.

As represented in the graph above, the majority of sectors saw a decrease in the value of 144s filed in the first quarter when compared to the prior quarter. The Cyclical Consumer sector saw the largest decrease in the value of 144s filed, decreasing 88% quarter-over-quarter. The Non-Cyclical Consumer and Technology sectors also saw significant decreases. The largest increase was in the Basic Materials sector, which rose a dramatic 359% in value from the prior quarter. Interestingly, the sectors with the best quarter-over-quarter performance are associated with resource extraction (Basic Materials and Energy), while sectors that rely on consumer spending (both Consumer sectors as well as Technology, Industrial, and Communications) saw a significant reduction in value brokered.